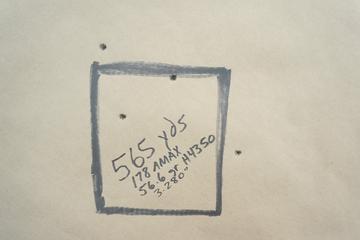 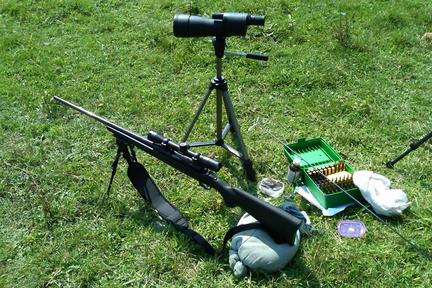 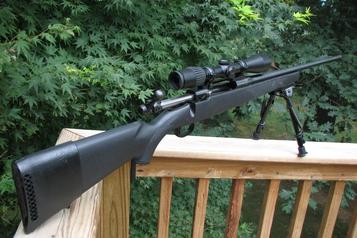 Why should I bother learning to shoot long range?

Good question.  Well... shooting long range is first and foremost fun.  And it's challenging.  And it's something that most people cannot do (and that of course includes the guys who think they know how to hit targets at 1000 yards but who in reality don't have a clue)...

Many of us will want to learn long range riflery for making long range shots on game animals, and once the craft is mastered, that is a reasonable endeavor.  Others will want to enter shooting competitions, where targets may be engaged out to distances of 1000 yards, and sometimes beyond.  Still others will realize that knowledge of the rifle is simply a good survival skill.  And it is this last mentioned category that drives my long range rifle philosophy.

Most shooters are being literally "left behind" when it comes to learning long range shooting skills.  Schools can be very expensive, and as I've said elsewhere in these pages most schools are not only selling information, they're wanting to also sell you some gunsmithing service or even a whole new rifle and/or other equipment... one even sells you the rifle and the ammo that goes with it.  Wow.  You'll be subtly and perhaps not-so-subtly persuaded that you don't have a prayer of making accurate long range shots without all their gear. It is obviously not in such a school's best interest to show you how to connect at long range with your dad's 30-06, right?

But my questions are... What happens when you run out of that magic ammo and you can't get anymore?  Or what happens if you find yourself, for whatever reason, without that super-cool rifle?  I'm not saying you shouldn't field the best equipment you can afford-- certainly you should.  But do you have the skills and knowledge to make some other rifle of a far lesser pedigree work for you?  If you're totally hamstrung without highbrow rifles, optics, computer programs, laser rangefinders, et al, then you'll be easily put out of action if even the least of your gadgets fail.

When you need a fire and you're out of matches... what will you do?

I've spoken elsewhere of what I call the "ready rifle."  Can you really put together a long range rifle from equipment you have "laying around the house?"  Yes, in many cases you can.  The cheap, 4 power scope you got at Walmart (the one mounted on your .22 rifle, or the extra one with the dusty lenses you tossed in the gun stuff drawer) can be pressed into service as a long range optic.  A modest amount of research will show that long range military rifles the world over, in times past and even today, have often used scopes of low magnification (some even 2.5 to 3.5 power).  In our introductory course, we will touch on the reasoning behind the ready rifle concept, and briefly discuss the assembly and fielding of such a system.  It is possible to dial various zero ranges on the 4 power scope to hit targets as far away as 1000 yards, perhaps even farther depending on the rifle and cartridge. What many folks don't realize about riflescopes is that the more magnification you have, the less adjustment room you'll have (as a rule).   Interestingly, the fixed 4 power scope's lower magnification becomes an asset when dialing for long range zero points, as it has a TON of elevation adjustment--and you likely won't even need to shim the base to get to your 1000 yard zero.  (note here that the higher magnification variable scope you probably have on your hunting rifle will likely fall well short of dial ups beyond 600 yards or so)... Too, the simple design of the fixed 4 power scope helps to add a bit of reliability to the optic to offset at least some of the shortcuts taken in the construction of such cheap scopes.  I've had many Tasco, Bushnell, and Simmons fixed 4 power scopes over the years and they are surprisingly reliable... and they're so "everywhere" that they almost grow on trees. This is why we should learn to use them.

Pictured below, a Savage 110 (current production, Accutrigger) in 270 Winchester, with a Bushnell 4 power scope.  This rifle is one of our test rifles, and has engaged targets successfully out to 1020 yards, with dialed corrections on the cheap Bushnell scope.

Below is a 24" steel plate, shot at 1020 yards (two shots only), with the rifle shown above.  As difficult as it will be for many to believe, the cheap Bushnell 4X scope was dialed using the system we teach to reach the 1020 yard zero.  Then the rifle was dialed back down to 825 yards for a hit... then back to 100 yards.  It can be done--and it's not as hard as you might imagine.

And by the way... the 270 Winchester is no slouch when it comes to long range.  Use the Sierra 150 grain Gameking, and an OCW load, and it'll do the job easily.  I use 52.5 grains of the IMR 4350 in Winchester brass, with WLR primers.  A good, hard driving load that will bring deer down easily at long range.  The sectional density of the 150 grain Gameking is great, and Sierra makes those bullets very well... they'll generally shoot right with Matchkings for accuracy.

I do have a preference for the most common cartridges, this because of the proliferation of ammo you can find for them.  We live in troublesome times, it seems, and world economics are not looking good.  What if you find yourself needing to borrow or trade for ammo or reloading components for your rifle?  Will it not be easier to find 30-06 or 270 Winchester ammo than, say, a couple boxes of 6.5 Grendel or 6mm Remington or 338 RUM? (and this would be a good time to counsel that if you do favor and use a less common cartridge, be sure to keep PLENTY of ammo on hand for it, perhaps even having a back up supply at an alternate location other than your home... just sayin' ;) )...

So again, my philosophy leads me to advocate a trending away from expensive, esoteric rifles, scopes and cartridges.  Perhaps it's not such a bad idea considering the times we're living in to move toward simplicity... toward pedestrian commonality...  toward boring stuff, you might say... :)  If you've already got some "ooo-ahh" equipment, that's fine--use it. (I have a little bit of that stuff myself)... but let's not overlook the value of learning how to improvise with whatever rifle you find in the closet, and whatever scope you might find behind the seat in your truck. A Remington 760 pump in 308 Winchester sporting a Simmons 4 power scope can reach out a lot farther than you might think. You just need to know how to make it work... :)

I'd had the idea for some time for an all purpose, shorter barreled rifle that can do just about anything you ask of it, from larger game to coyotes to groundhogs at long range... and even hit MOA at 1000 yards, just by dialing the correct elevation level on the scope.

The Greek word Machaira (makh'-ahee-rah) describes a short sword. Short swords (or long knives, as it were)... were extremely effective in the hands of Roman soldiers. These knives were not unwieldy, and very fast into action. That's what we're going for with this rifle idea--something that can do a lot of different things such as hunting medium and large game, varminting when necessary... something that won't embarrass you at the shooting range, and something that can hit MOA out to 800 yards, or even 1000 perhaps--all this, and yet it can be carried about easily and is fast into action.  Tall order, I know--but it can be done! ;)

I glass bedded this rifle into a Stocky's laminate stock, put a Weaver Grand Slam 3.5 to 10x scope on it, the trigger is a crisp 2 pounds... I have the Burris Signature off-sets giving the scope more than enough elevation to get it to close to 1200 yards, but 1000 yards was the goal.  And the scope won't dial down one rev too low--the turret bottoms out before I go one rev below 100 yards so this keeps me from getting lost on the elevation dial.

A typical group from the above rifle...

A short list of ideas for the Machaira concept follows:

1. 18 to 20 inch barrel
2. 9 pound weight limit with bi-pod
3. MOA capable
4. variable scope of 40mm max objective having a low power of not more than 3
and a high power of not less than 9 with low profile turrets
5. magazine capacity of at least 3 cartridges

other preferred criteria would be:

I was pretty pleased with this performance, as this is a factory Savage barrel and not such a smooth one at that (some visible light pitting looking into the bore from the muzzle)... this one coppers up pretty heavily after 20 or so shots, but accuracy does not fall off. I've not cleaned it in about 40 or 45 shots, and she's still holding sub MOA.

With 40 MOA dialed on the scope's elevation turret, I can hit 2 MOA sized targets at 1040 yards.  The rifle will probably shoot tighter at that range, but I've not tested it on paper as of yet.  Total investment in this rifle was (as mentioned elsewhere on this site) under 800 dollars.  (Update, this 30-06 dose very well with the 208 grain Hornady BTHP and AMAX with 53.2 grains of IMR4350 in Winchester brass. Consistent hits out to 1100 yards are the norm with this field worthy rifle)...

Another Machiara that we put together for one of our local shooters, it's a Savage 110 in .243 Winchester...

This rifle has the factory "tupperware" stock, but we glass bedded the action and actually poured about 1/2" of fiberglass into the forearm to stiffen it up. The recoil boot helps the length of pull, and a good coat of truck bed paint gives it a tough, easy to grip, and anti-reflective finish.

We free-floated the barrel, and the stock 110 trigger was worked down to a safe 2 pounds.  The scope is the Weaver Grand Slam in 3.5 to 10 power, in Burris Signature rings with a 20 MOA offset rise in the rear, and a 10 MOA offset drop up front, to give the scope around 30 MOA of extra elevation.  And as mentioned earlier, this prevents the shooter from accidentally dialing below the 100 yard zero, as the turret will bottom out before going one revolution below that point.

This rifle is shooting well under MOA, and will certainly have no trouble reaching to 1000 yards with good accuracy.

Total investment in this rifle is well under 600 dollars... (actually, due to the owner's propensity for walking in to the best deals you've ever heard of, he's probably got less than 500 dollars in it)... But most folks could assemble it for around 600, to be sure.  And it'll do the job--no doubt. ;) 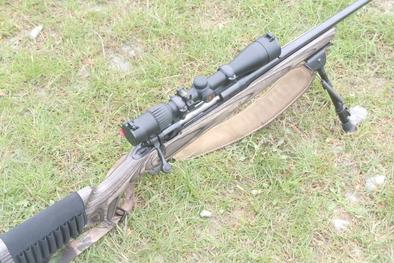